SMACC Dublin is behind us. It was a phenomenal 3 days of inspiring talks, discussions and events. Here are a few neuro-related impressions:

Martin Smith (Neurocritical Care consultant at the National Hospital for Neurology and Neurosurgery in the UK) gave a solid talk highlighting the challenges pertaining to the concept of brain death, especially the notion that death must be viewed as process, rather than a singular event. He dealt with a range of issues from differing cultural understanding, imprecise definitions and the huge task of unifying clinicians around a common and consistent set of criteria. The concepts of whole-brain death vs. brainstem death were also explored. 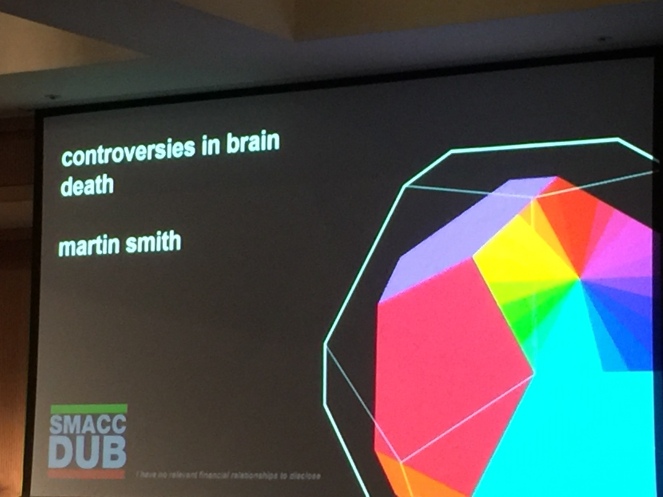 Alistair Nichol (Chair of Critical Care Medicine in University College Dublin) shared a few insights into the use of therapeutic hypothermia in brain injured patients. The Eurotherm trial has by many clinicians been viewed as the nail in the coffin for TH, but the ongoing Polar study may yet bring new evidence to light.

On a lighter note, we witnessed two proper bare-knuckle fights on the two following subjects:

“It is time to throw away the hard collar”:
PRO: Darren Braude (Chief arguments: no evidence [true], possible harm, usually not done properly. Many centers and services have already changed their practice away from collars and seem to do no worse)
CON: Karim Brohi (Chief arguments: If there´s harm, not likely to be clinically significant. Given a significant improvement in outcomes in cervical spine injury over the last decades, should we really be so quick to dispense with the collar? Should be used with caution, patient selection is key)

“Neurocritical Care Improves Outcomes in Severe TBI”:
PRO: Martin Smith (Chief arguments: Clear evidence in favour of NICU as concept, even if single interventions/monitoring modalities usually fail to show evidence. Complex patients that should be managed in devoted units)
CON: Mark Wilson (Chief arguments: NICU may do more damage than harm, unless done optimally, which it rarely is. Nature does a better job than all but the most excellent clinicians. Focus on general ICU care)

A bit more about our site….

Although we do our best to keep NeuroScand updated and as clinically useful as possible, we cannot assume responsibility for the validity and reliability of its content. Please use your own clinical judgment when reading this site. NeuroScand is an open forum and we invite discussions. However, we are not responsible for comments made by other users.