It is widely accepted that hypotension in patients with traumatic brain injury is associated with poorer outcomes, as confirmed in a number of studies. But is there really a reliable cut-off for when we should be happy with a TBI patient´s blood pressure in a prehospital setting?

A recent article in JAMA Surgery (Spaite et al. December 07 2016) has given us some cause to reexamine the way we view blood pressure targets in prehospital management of TBI patients. There seems to be a consensus for keeping a systolic BP over 90 mmHg. Several major guidelines have adopted this as policy, based on studies (1,2) that suggest that there is some kind of inflection point at an SBP of 90, where those who fall below are assumed to suffer worse outcomes. This notion is overdue for a serious rethink.

The study in question is a part of the parent study Excellence in Prehospital Injury Care (EPIC) TBI, which is still ongoing. The authors included 3844 eligible TBI patients, whose prehospital data were extracted from the Arizona State Trauma Registry. These were patients 10 years or older with traumatic brain injury, either isolated or as part of multi trauma, with AIS (head) scores of 3 or greater. In other words: moderate to serious head injury.

Through various statistical models, they examined the relationship between the lowest SBP measured in the prehospital setting and in-hospital mortality in the cohort. I´ll let the authors present their own noteworthy results:

“The model revealed a monotonically decreasing association between systolic pressure and adjusted probability of death across the entire range (ie, from 40 to 119 mm Hg). Each 10-point increase of systolic pressure was associated with a decrease in the adjusted odds of death of 18.8% (adjusted odds ratio, 0.812; 95% CI, 0.748-0.883). Thus, the adjusted odds of mortality increased as much for a drop from 110 to 100 mm Hg as for a drop from 90 to 80 mm Hg, and so on throughout the range.”

In a single sentence: There is no indication of a single threshold SBP that relates reliably to mortality. As it happens, there appears to be a nearly linear relationship between prehospital SBP and risk of death. 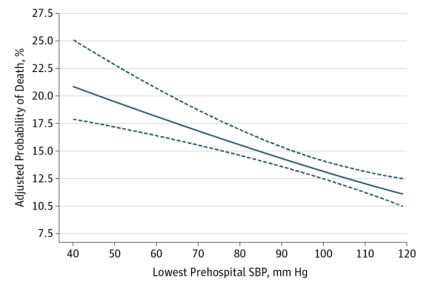 As with any study it would be unwise to infer direct causality between SBP and TBI outcomes, but there certainly seems to be a strong enough relationship to warrant attention. Of course the usual caution must be applied in interpreting the results. It is an observational study based on prehospital data-entry, which may be of limited accuracy. Also, what happens to the patients in the subsequent phases of resuscitation is beyond the scope of this study. There may be many confounding factors unknown to us that could affect outcomes. Furthermore, the cohort is a mix of patients with varying degrees of head injury, with a great deal of extracranial trauma thrown in. In fairness, the authors state that they have adjusted for these factors, using various statistical acrobatics that are a bit over my head.

Regardless of these limitations, the study seriously challenges the idea that there is a clinically meaningful haemodynamic threshold to hold our patients to. It also makes physiological sense that optimal haemodynamic targets would vary widely between individuals, depending a number of factors (type of injury, age, pre-existing hypertension etc). Upon a quick and informal review of the literature on the subject I found only a few  studies supporting a threshold of 90 mmHg, two of which are mentioned below (1,2). I found one large retrospective study that suggests an inflection point exists at 120 mmHg (3. Caveat: that study looked at first SBP in-hospital vs. death from isolated TBI).

The recently revised Brain Trauma Foundation Guidelines have given a Level III recommendation to a SBP at ≥100 mm Hg for patients 50 to 69 years old or at ≥110 mm Hg or above for patients 15 to 49 or over 70 years old. This is in contrast to a recommended lower limit of 90 mmHg in the 2007 edition of the guidelines. In other words, we´re still somewhat in the dark here and there is good reason to question the evidence behind these seemingly arbitrary values.

As an aside: A discussion that often surfaces in neurotrauma is how to reconcile SBP-targets desirable for isolated head trauma with those of patients with additional extracranial injuries. Clearly, an individual with thoracic or abdominal trauma, either at risk of or manifestly bleeding, would likely be adversely affected by efforts to raise BP beyond 90 mmHg. This study does not delve into that conundrum, but it did include patients that fit both categories. It would be interesting to see if subgroup analyses could be extracted post-hoc to differentiate between these two patient groups.

These are just my thoughts. This subject obviously invites discussion. I am very keen to hear your opinion. Please write a few lines below or drop your comments on Twitter.

A bit more about our site….

Although we do our best to keep NeuroScand updated and as clinically useful as possible, we cannot assume responsibility for the validity and reliability of its content. Please use your own clinical judgment when reading this site. NeuroScand is an open forum and we invite discussions. However, we are not responsible for comments made by other users.